The experiment was performed for investigating the differences between user cognition of classical 2D visualization with contour lines and perspective 3D view.

Before each stimuli, the respondents had 30 seconds to read and remember the task. After that, the fixation cross was presented for 600 ms to ensure that all respondents started from the center of the stimuli. Then, the stimuli with the map was projected for 60 seconds. Respondents had to answer the question with use of mouse click directly into the map. Stimuli were presented in random order. For avoiding the learning effect, map with 3D visualization was inverted or the question was modified a bit. Whole process of experiment is depicted in figure.

In the SingleMap experiment, stimuli were designed as a pair of maps in 2D and 3D. Each slide contained one type of visualization. The aim was to reveal, which kind of visualization will be preferred when searching for answer on spatial query.

For analysis of SingleMap experiment, four stimuli were selected and “ScanPath length” was analyzed in this case. It is described as the length of the gaze fixation connections in pixels.  According to Goldberg et al. (2002), a longer ScanPath indicates less efficient searching. Contrast to this assertion, group of cartographers has longer ScanPaths than non-cartographers in all cases. Wilcoxon test was used to investigate differences between ScanPath lengths for “2D” and “3D” maps (always the pair of maps – 1-2 and 3-4). Statistically significant difference was found between map 3 and 4 (in case of NonCartographers, and generally if neglecting groups). No differences were found in case of using other eye-tracking metrics (Fixation duration mean, fixation count, trial duration).

ScanPath comparison was used for stimuli 1 and 2 from the SingleMap experiment. In each stimuli, a rounded AOI around each point in the map was created. ScanPath strings were generated with use of open-source application OGAMA and string comparison was visualized via tree-graph. Software eyePatterns can visualize the string matrix by displaying clusters of similar sequences. Any 2 nodes that come off of the tree in a „V“ in the figure 11 were clustered together. At some point in the clustering process, those two nodes were the most similar items. The figure shows visualization of ScanPath similarity for 40 participants and two stimuli (1 and 2). On both maps, the same AOI’s were created. 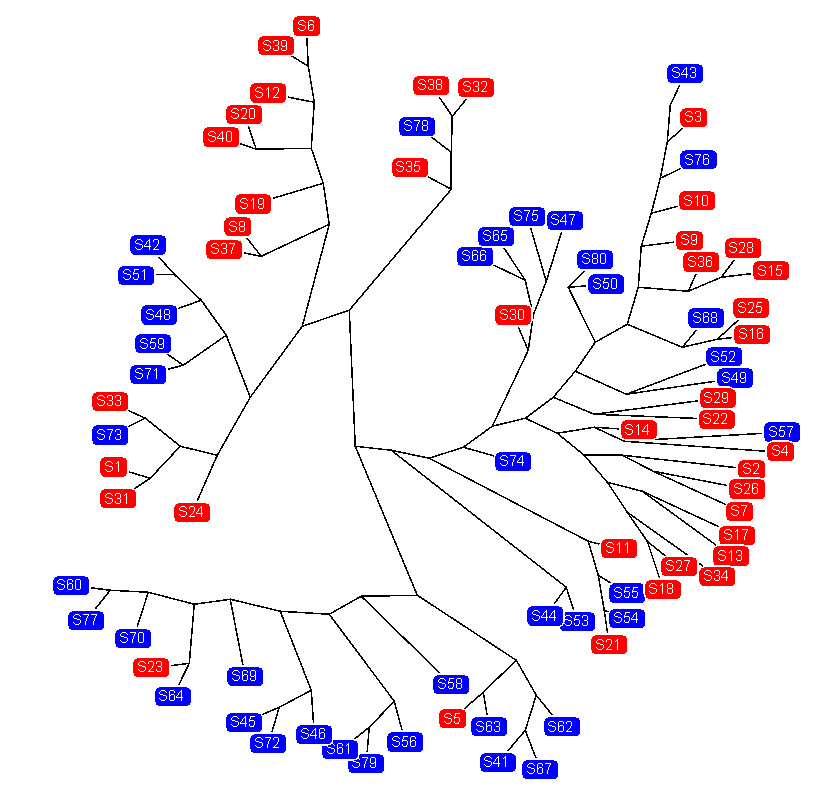 The colors in the graph are distinguished according to stimulus 1 (red) and stimulus 2 (blue). The groups with the same color are visible from the graph. For example in the upper part of an image, there is a branch with only red labels. In the bottom part, another large branch contains 16 blue labels and only two red. From this result, the different participants strategy for two stimuli is visible.

All stimuli with questions can be downloaded from here: Stimuli_SingleMap