The experiment was performed for investigating the differences between user cognition of classical 2D visualization with contour lines and perspective 3D view. Eye-tracking experiment was supplemented by online questionnaire focused on maps understandability, suitability and aesthetics. Results of the questionnaire shows, that the majority of participants prefer 3D visualization.

Before each stimuli, the respondents had 30 seconds to read and remember the task. After that, the fixation cross was presented for 600 ms to ensure that all respondents started from the center of the stimuli. Then, the stimuli with the map was projected for 60 seconds. Respondents had to answer the question with use of mouse click directly into the map. To avoid the influence of the location of maps within the stimulus (left, right), two groups of users were tested. Stimuli for both groups were the same, but the position of 2D and 3D maps within the stimulus was changed. On the first one, 2D map was presented on the left side, 3D on the right. On the second version vice versa. 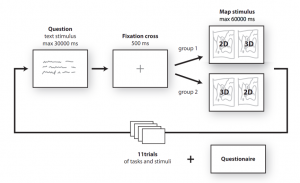 In the DualMap experiment, stimuli were designed as a pair of maps in 2D and 3D side by side. The aim was to reveal, which kind of visualization will be preferred when searching for answer on spatial query.

Total of eleven image stimuli were used in the experiment. Terrain visualizations (stimuli 4-8) were created in Esri ArcMap and ArcScene. The work of Savage et al. (2004) was used as an inspiration.

For the analysis of DualMap experiment, the “Dwell Time” metric was chosen. It was used for comparison of attention distributed between targets. Within the stimuli only two AOI representing 2D and 3D map were marked. The statistical analysis was then used to examine whether there is a difference between how users viewed part of the stimulus with 3D Map and 2D map. On the significance level α = 0.05 no statistically significant difference for any of the studied stimulus was found.

The results indicated, that DualMap experiment design was not suitable, because respondents cognition was influenced with the order of the maps in the stimuli more than by differences between 2D and 3D visualization. For further analyses, use of SingleMap experiment should be more appropriate.

All stimuli with questions can be downloaded from here: Stimuli-DualMap