Distribution of nodes in 3-dimensional space is influenced by a lot of factors. A huge challenge is to include terrain proportions to the distribution process. This paper considered not only technical parameters of nodes but also terrain proportions (including information about measured variables) displayed on four different basemaps. The experiment was performed using eye-tracking technology. Eye-tracking brings added value to usually used questionnaire – the eye-movement data. More valuable information was discovered thanks to the recorded eye-movements. These data reveal places where the participant hesitated or shows the method of problem solving. The experiment consisted of eight tasks divided into two parts – static and interactive.

The core of the experiment consisted of 8 different tasks. Every task was solved on four different stimuli (basemaps). The selected types of basemaps included OpenStreetMap (OpenStreet), Basic map of the Czech Republic (ZMCR), ZABAGED and orthophoto. These basemaps were sorted according to the expertise estimation. The solution was the least obvious at the first basemap, and the most obvious at the last appeared basemap. Five tasks were static, the question appeared at the beginning followed by the map and check list with possible answers. Three tasks were interactive, these were linked to Google Drawing. Participant drew the lines representing the communication path between nodes and gateway in the first two interactive tasks. Participant knew the position of gateway, communication distance and borders of fenced areas in the last question. He distributed the nodes and suggested the most efficient communication paths. Finally, the questionnaire summarizing the last interactive task appeared.

Four types of basemaps were used as stimuli. Every stimulus included topographic basemap and thematic content. Four different topographic basemaps were used for every task, the thematic part stayed the same. The basemap which usually appeared at the beginning of questions is ZABAGED (Základní báze geografických dat). ZABAGED was created in the scale 1:10 000 and it consists of topographic and elevation part. This elevation part was not used in the experiment. OpenStreetMap (OpenStreet) is a collaborative project creating a free map of the world. Elevation data can be taken over from the SRTM project. This elevation information was not used in the experiment. Basic map of the Czech Republic (ZMCR), was created in the scale 1:10 000 and is the basic Czech state cartographic work. This map includes topographic, elevation and description part. All three parts were used in the experiment. Orthophoto presents the set of color orthophotos in size and order of maplist which is periodically updated in the scale 1:5000. The picture of the land surface is redrawn so that the fluctuations of the picture are erased.

For the study, remote eye-tracking device SMI RED 250, developed by SensoMotoric Instruments, was used. This device was operating at frequency of 250 Hz. Eye-tracker was supplemented by web camera, which records participant during the experiment. This video helps to reveal the cause of missing data, respondents’ reactions to the stimuli and their comments to the particular maps. For data visualization and analyses, three different applications were used. First one is SMI BeGaze, which is software developed by the manufacturer of the device. Open source software OGAMA and CommonGIS developed at Fraunhofer Institute in Germany were used for visual analytics of eye-tracking data.

First of all, the accuracy of participants´ answers was evaluated. Secondly the eye-movement analyses were performed.

In all cases, statistically significant differences were found between the first presented map with one, two or all three other maps. Differences between other (not the first one) were not observed. This situation is clearly visible from a boxplot in the Figure. 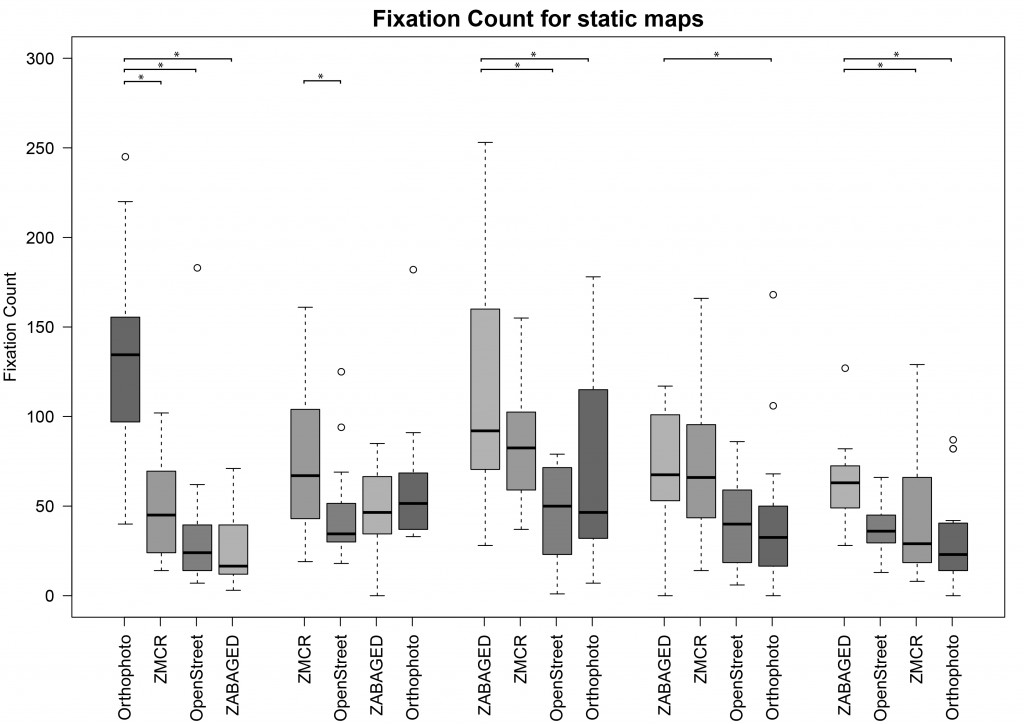 The boxplot contains data for Fixation Count metric for all stimuli in the static part of the experiment. Boxplots are coloured according to map type and are sorted according to their order in the experiment. Statistically significant differences are marked with an asterisk. It is evident that above the first map, respondents spent the highest amount of time (and also fixations). On the next maps, they were much faster, they remembered the situation from the first map. In some cases, the number of fixations increased between the second and next presented maps. An example is task 2, where respondents had to found a grassland. This type of land cover was best seen on the orthophoto, so the amount of fixations above this type of map was higher than in the case of OpenStreetMap or ZABAGED. Recorded eye-tracking data were visualized with the use of FlowMap method in the V-Analytics software. 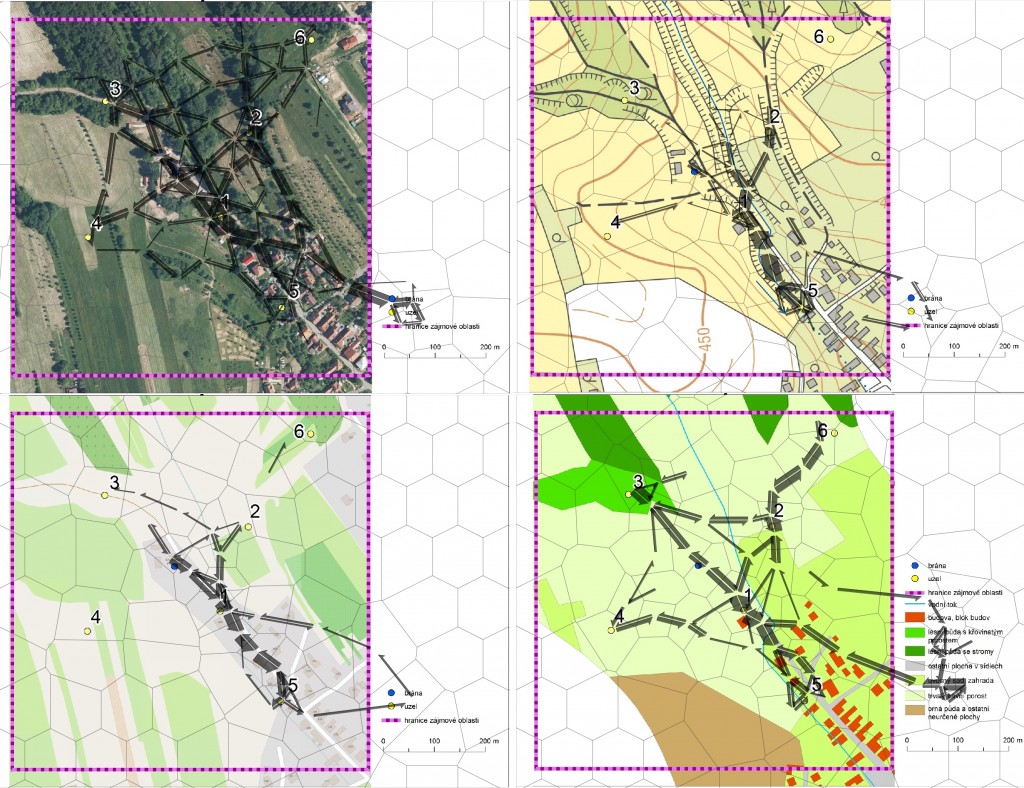 In the case of interactive stimuli, the eye-movement analyses were performed, participants´ answers in the form of drawings were analysed in conjunction with the eye movement recorded over them. Participants saw topographic basemap with thematic content in the first two interactive tasks, they drew the most effective communication paths between drawn nodes. 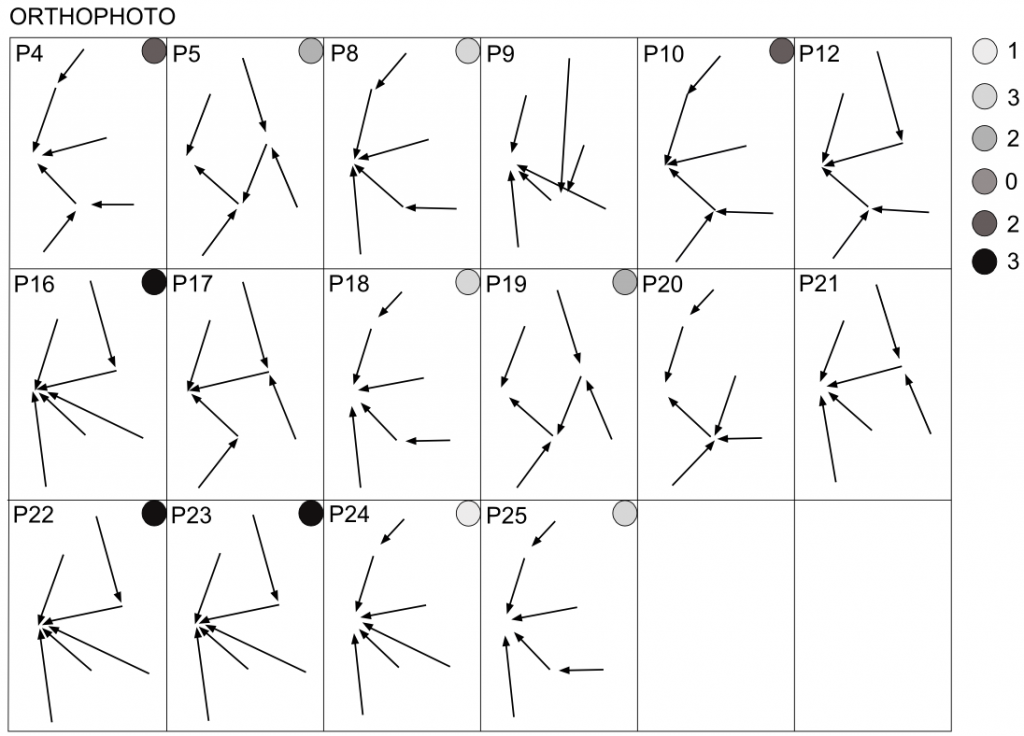 The experiment consisted of eight tasks divided into two parts – static and interactive. Every task was displayed on four different basemaps queried according to expertise estimation. The order lead to significantly higher number of fixations on the first appeared map. Number of fixations usually decreased with the following map. The number of fixations correlated with the time spent solving the task. Wireless nodes distribution is a subjective process, every participant has different distribution preferences. The most avoidable factors influencing participants’ decisions about situation of nodes are bricked buildings on ZABAGED and OpenStreet. Trees are avoided in orthophoto basemap, they are preferred to buildings. It was discovered that participants prefer terrain proportions to technical parameters even when not considering them can lead to non-functional wireless sensor network. Orthophoto was selected as the most suitable map for displaying thematic content related to wireless sensor network. Orthophoto was also selected as the one bringing the most valuable information about the obstacles in the region of interest. Orthophoto offers the best orientation because the participant is able to imagine the realistic view of the region of interest.

All stimuli can be downloaded from here: Stimuli – Sensors