Polyline and star glyphs can encode the same message and can provide similar functionality. Thus, if the two glyph types are similar and can be used for the same data, the question arises as to which of them better facilitates various user tasks. To address this question, the authors conduct an empirical study of 26 individual users to investigate differences in user performance for polyline and star glyphs shown either in a grid plot or on a map display. The authors apply a task-based approach with eye-tracking, as well as a subjective questionnaire and a psychological test of cognitive style. They find that polyline glyphs better facilitate tasks when datapoint values in glyphs are to be read, whereas star glyphs are better when a visual search among glyphs is to be done. Moreover, the results reveal that the map display works better than the grid plot. If star glyphs are to be used, the key needs to be better incorporated into a visual interface.

Since there might be differences in user performance for polyline and star glyphs shown either in a grid plot or on a map display, we examine four layout modes (M#1–4). We address three research questions: 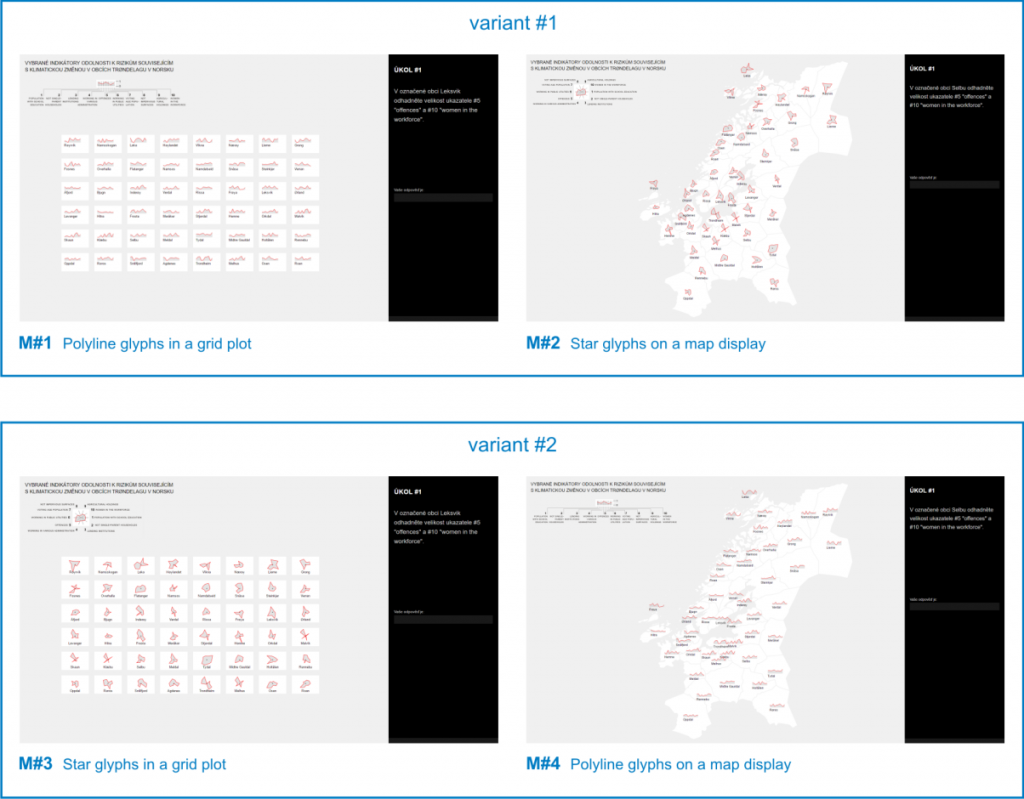 Individual user sessions are arranged as two-phase user testing (Figure 5) divided by minimum of a three-day break. This is done to avoid a learning effect, whereby, during the “later” stage of testing, participants may use their knowledge acquired in the “earlier” stage, and therefore the results might be influenced by already gathered experience. Moreover, a variant assigned to participants in each phase will shift: The first participant starts with variant #1, the next participant uses variant #2, and so on. In the second phase, participants use the complementary variant. For example, if a participant uses variant #1 in the first phase, they use variant #2 in the second phase. 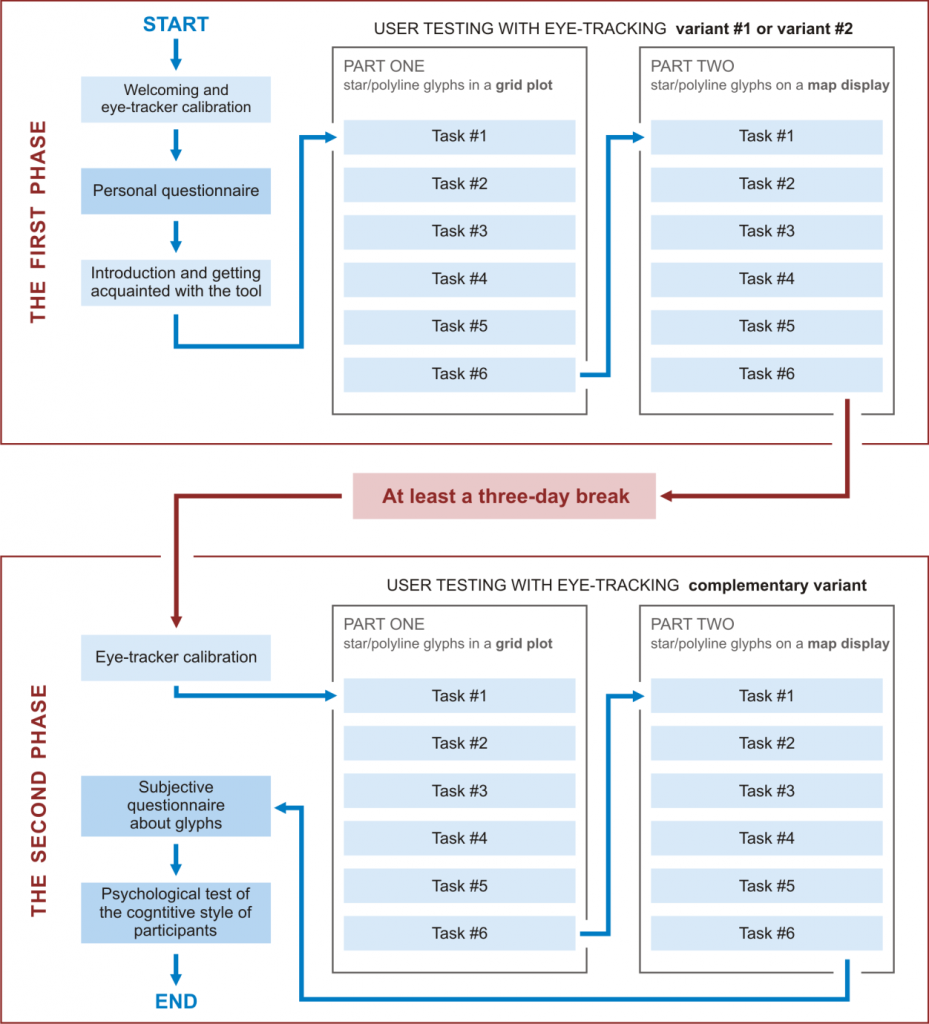 As study material, we design a single-page web application where regular web browser can be used to run the tool. We use costless JavaScript APIs such as D3.js and jQuery Sparklines to develop the tool. Labels and comments in the tool’s interface are in Czech, with the exception of the key (legend) which is in English. The interface features four layout modes in which glyphs are either polyline glyphs (M#1, M#4) or star glyphs (M#2, M#3), and in which glyphs are either regularly distributed in a grid (M#1, M#3) or geographically distributed on a map (M#2, M#4). Additionally, for the purpose of the empirical study, the tool has an opening dialog box in which the four layout modes are grouped as follows:

In all modes, the main panel is accompanied by both a task panel and a key that explains how data are encoded in glyphs.

We gain scientific evidence through individual user sessions in which we ask participants to use the tool to solve six user tasks, T#1–6 (Table 1). While they execute the tasks, we record their eye-movements, oral comments, and the screen. We also collect task their answers. The tasks are designed to reveal how users interact with polyline and star glyphs. T#1 is used to examine how users derive values from either polyline or star glyphs. T#2 is complementary to T#1: Participants search for a glyph that encodes a certain variable score. In turn, in T#3, users search for the same glyph as the one shown in the task panel. We use this task to verify which of the four layout modes performs better regarding participants’ visual searches. In T#4, participants compare all glyphs between each other to find two the most similar glyphs. Regarding T#5, a common task in visual analytics is to find the most distinctive cases among graphic entities, and we therefore request users to do the same. Again, we investigate whether this task can be more effectively accomplish with polyline glyphs or with star glyphs. In the final task, T#6, participants search for a compact area of three glyphs that are similar to each other.

Total of 26 individuals (15 males and 11 females, average age 23 years) attend the study voluntarily. They are not paid any compensation for the attendance. All of them are either bachelor or master’s students taking the geoinformatics course at Palacký University. Their skills and knowledge are considered representative of target users. Students from the first year of the bachelor’s study program are excluded because they have not had any training in GIScience, and therefore their performance is likely to be worse than those who have had this training.

We use eye-tracker SMI RED 250 in the eye-tracking laboratory of the Department of Geoinformatics at Palacký University, Olomouc, in the Czech Republic. The stimulus is displayed on a 24-inch screen with a resolution of 1920 × 1200 pixels. Eye positions are recorded at a frequency of 250Hz. The eye-tracker is supplemented with a web camera that records participants during the sessions. We do this because audio and video recording can help to reveal the possible cause of missing data, participants’ reactions to the stimuli and their comments on the tasks.

The outcomes of the subjective questionnaire about glyphs

Since the questionnaire is presented at the end of the second phase, all participants use all four layout modes ahead of the questionnaire. In its analysis, weighted scores are used to amplify higher ratings: The values leading to both ends of the scale have increasing weights, from 1 to 3 (the middle value, 0, is subtracted from the analysis).

We analyze trial duration by task and layout mode. This metric shows how long it takes to solve a task. A quick look at the boxplots will reveal that in the comparison of the grid plot and the map display (consisting of the same glyph types), all tasks are solved quicker if the map display is used. The glyphs that participants look at depend on their user tasks. For example, to read datapoint values encoded in a given glyph in T#1, the participant can either use the key (“absolute interpretation”) or compare the glyph with other glyphs (“relative interpretation”). In T#1, fixations are more numerous in the selected glyph and its neighborhood (the latter may be caused by the eye-tracker inaccuracy), because participants look at the nearest surroundings of the selected glyph and do not look at the bottom part of the grid plot. This may mean that participants do not tend to compare the glyph’s shape with other glyphs. In more distant glyphs, only a few fixations occur and they probably accompany the gaze movements from the selected glyph to the key. The outcomes of the test of the participants’ cognitive style: analytic versus holistic users

In the cognitive style test, 32 images are displayed that show big numbers (hereafter referred to as BNs) composed of small numbers (SNs). Participants determine either BNs or SNs, in 16 images for each. From the Hypothesis software used to run the test, we obtain the average times for SNs and BNs for each participant. Then, we calculate averages for SNs and BNs for the whole sample (n = 26). The times obtained for BNs are about 13% shorter than those obtained for SNs. Participants who feature the smallest deviation from 1 (who deviate to less than 10%) are labeled neutral. Remaining participants are labeled as either analytics (six participants with better performance for SNs) or holistics (seven participants with better performance for BNs). 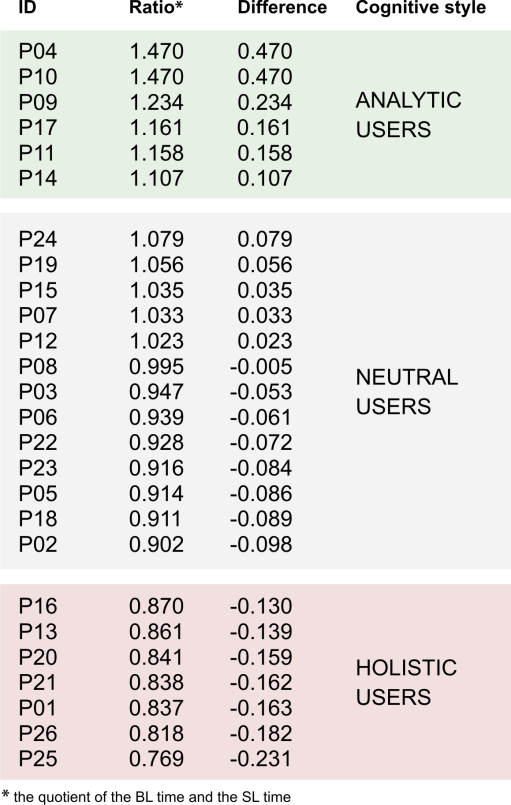 If either polyline or star glyphs can be used, polyline glyphs are better for facilitating tasks in which datapoint values are to be read. By contrast, if the purpose is to facilitate visual search among glyphs (i.e., to find similar or distinctive glyphs), then star glyphs seem to be a better choice. Moreover, our study reveals that polyline and star glyphs arranged as a map display work better than glyphs grouped in a grid plot: Participants who use glyphs in the grid to solve user task perform worse than those who use glyphs shown on the map display.

There are no particular differences in the visual behavior of participants who use polyline glyphs and participants who interact with star glyphs. One finding is that participants use the key (legend) more frequently if they read datapoint values from star glyphs. Therefore, the lesson learned is that a key needs to be better incorporated in a visual interface if star glyphs are to be used to support such user tasks. Finally, glyphs are likely to be used more accurately by analytic users, although analytic users can take more time in comparison with holistic users.