The main aim of presented paper is to find the most realistic and preferred color settings for four different types of surfaces on the aerial images. This will be achieved through user study with the use of eye-movement recording. Aerial images taken by the unmanned aerial system were used as stimuli. From each image, squared crop area containing one of the studied types of surfaces (asphalt, concrete, water, soil, and grass) was selected. Captured images were edited with the graphic editor Photoshop CS6. Contrast, clarity, and brightness were edited for all surface types on images. Finally, we get a set of 12 images of the same area with different color settings. These images were put into the grid and used as stimuli for the eye-tracking experiment.

Respondents’ answers were evaluated and the most realistic and most preferable color settings were found. The advantage of the eye-tracking evaluation was that also the process of the selection of the answers was analyzed. Areas of Interest were marked around each image in the grid and the sequences of gaze movements were analyzed. Sequence chart was used for visualization and eye-tracking metrics were statistically tested. The presented paper shows the differences in the perception and preferences of aerial images with different color settings.

For the aerial imaging, we used the Hexacopter XL aircraft. It is a multi-rotor platform equipped with six propellers and a maximum payload of 1.5 kg. The imagery was taken using a Canon EOS 500 D camera (15 Mpx) and specially calibrated lens with a fixed focal length of 20 mm. The height of the aerial imaging was 50 meters, and main targets were asphalt, concrete, water, soil, and grass. The camera was set to the time priority regime with 1/800 s.

For image corrections, Adobe Photoshop Lightroom 5 and Photoshop CS6 were used. Four parameters were used for correcting images – exposure, contrast, clarity, and saturation. Exposure controls overall exposure settings. There can be added some EV (exposure value) to the image. EV can be positive or negative. Contrast is defined as the separation between the darkest and brightest areas of the image. Increasing contrast increase the separation between dark and bright, making shadows darker and highlights brighter. Clarity adds depth to an image by increasing local contrast. Saturation adjusts the saturation of image colors equally from –100 (monochrome) to +100 (double the saturation). Table 1 shows the settings which were applied to the original image. Original image from camera is identified as A. 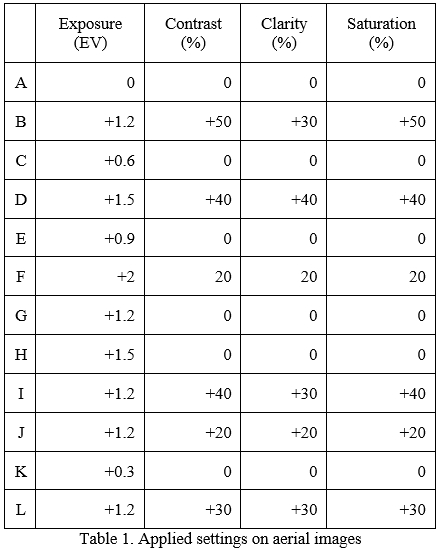 Total of 27 respondents participated in the experiment, but due to the bad calibration results (deviation >1° of visual angle) or low tracking ratio (<95%), three respondents were excluded from the results. Finally, we used data from 24 respondents (16 males and 8 females). The respondents were pregraduate and postgraduate students of geoinformatics. Participants were not paid for the testing.

The data were analyzed in the SMI BeGaze and open-source application OGAMA (Voßkühler et al., 2008). For the data conversion, developed tool smi2ogama (available at www.eyetracking.upol.cz/smi2ogama) was used. The advantage of OGAMA more user-friendly work with Areas of Interest (AOI). The grid of 12 AOIs corresponding to the images in the stimuli was created in OGAMA. 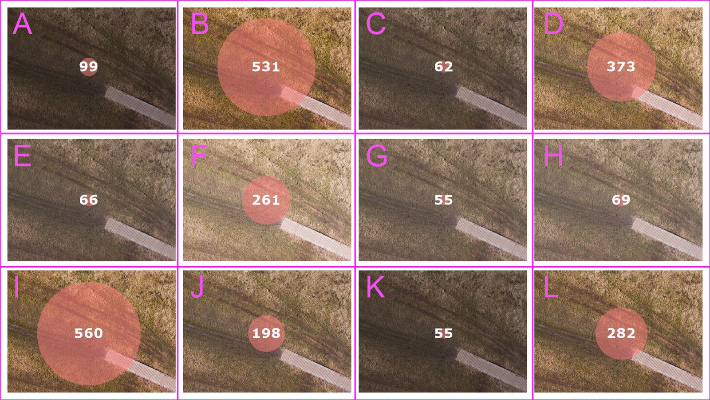 Eye-tracking data could also be visualized with the use of Sequence Chart that shows the temporal sequence of the visited Areas of Interest. The Figure shows again the stimulus with grass land cover. Areas with longer Dwell Time (AOI B,D,F,I and L) were colored in the shades of red. The rest of AOIs are yellow. 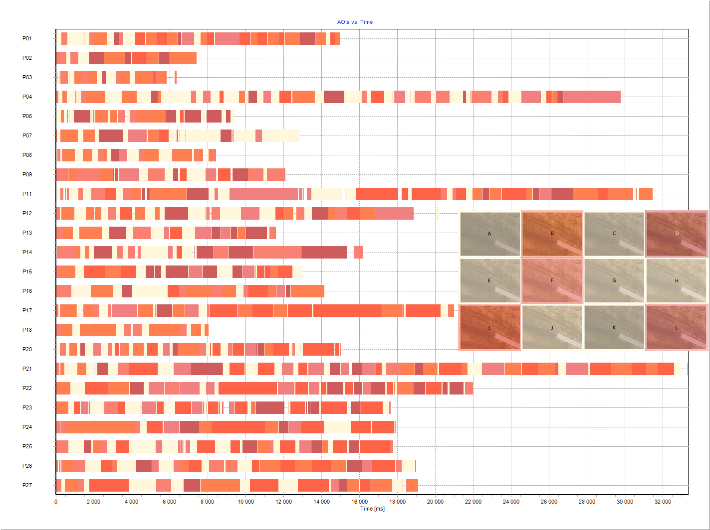 The eye-tracking experiment was conducted to find which color of the five different land covers is favorable by the 24 respondents of the experiment. The analysis of respondents answers data shows that majority of the participants chosen only between five color settings (AOI B,D,F, I and L) which correspond to settings shown in Table. Based on results from eye-tracking experiment, color settings B and I can be considered as the best results for all surface types. 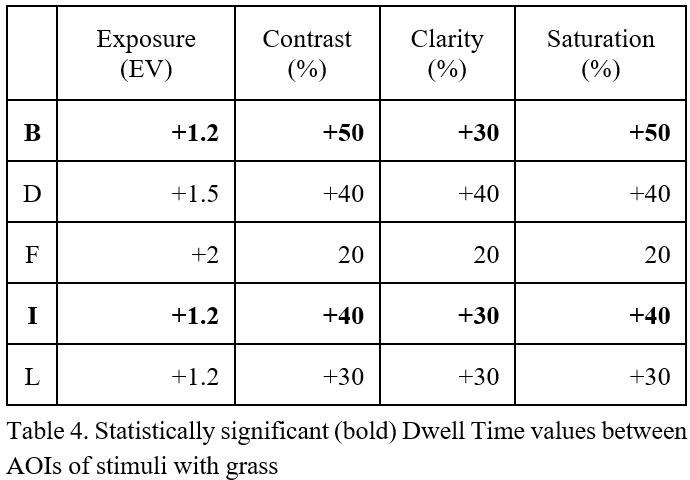 Mirijovsky, J., & Popelka, S. (2016). Evaluation of Color Settings in Aerial Images with the Use of Eye-Tracking User Study. ISPRS-International Archives of the Photogrammetry, Remote Sensing and Spatial Information Sciences, 763-767. doi:10.5194/isprs-archives-XLI-B3-763-2016.