The experiment dealt with the assessment of e-learning portal for high school students with the use of eye tracking technology. E-learning portal was created with the use of multimedia and interactive elements. These incentives can theoretically ensure users‘ attention in the study and increase efficiency in the process of cognition of information. Selected pages contained text and images and were enhanced by multimedia and interactive elements. The most important interactive features were interactive cartoon characters.

Behavior of participants in the process of the study was tested. Eye-tracking experiment was performed on the group of twenty-four participants (high school students). Participants worked with selected parts of e-learning portal containing different types of slides. The aim of the test was to determine whether the proposed incentives are really used. Experiment was conducted on a pre-selected group of users under the same conditions. It was observed if the students themselves start to identify and use interactive elements, or if they aim to plain text only. In the next stage, the tutorial for e-learning was shown to them, and their activities were tested again.

First training stimulus has no task – just to get participants familiar with the environment of e-learning portal. First task was to study displayed web page as much as possible, to be able to answer the question. After 120s (or manual shift with keyboard), the question was displayed. The answer for this question was directly in the text. Question in the second task was displayed before the stimuli. Respondents had to find out the answer for the question “How long it takes to decompose the plastic bag?”. The aswer was not directly in the text, but respondents had to move the cursor above the animated cartoon character. The main purpose of this question was to find out, if respondents recognize the possibility of displaying the additional information via pointing at the character. After that task, the image stimulus with the tutorial to e-learning portal was shown to respondents, to inform them about possibilities of the portal. Third and fourth tasks were similar as previous one – the question was displayed before the stimuli, a respondent tried to find out the answer in the text, but also in the images, links etc. Last task was little bit complicated. Respondents had to browse through the menu of the portal to find out information about SO2 polution. Purpose of this task was to verify, if they are able to work with the portal generally. Schema of whole experiment is shown in the figure. 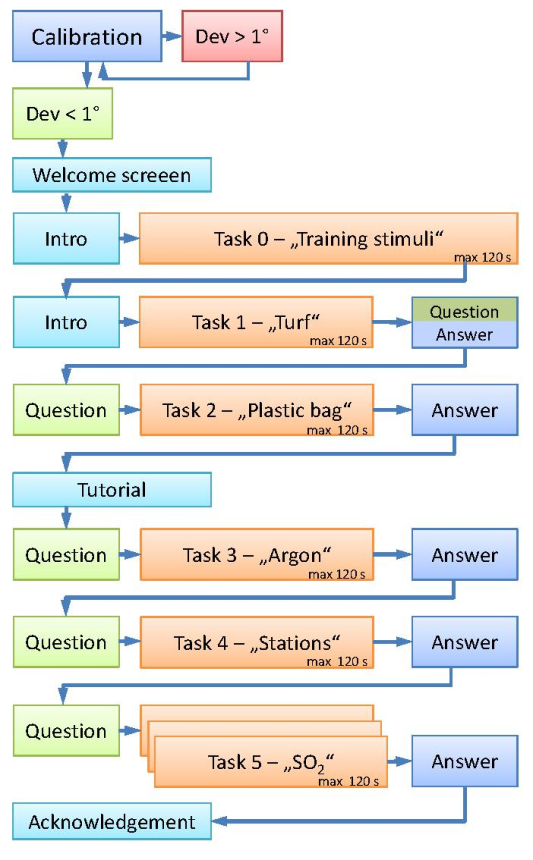 For the study, remote eye-tracking device SMI RED 250, developed by SensoMotoric Instruments, was used. This device is capable of recording eye-movements with the frequency of 120hz. The data are recorded every 8 ms. For screen recording stimuli, gaze data are overlaid over the video with frame rate from 10 to 30 fps. 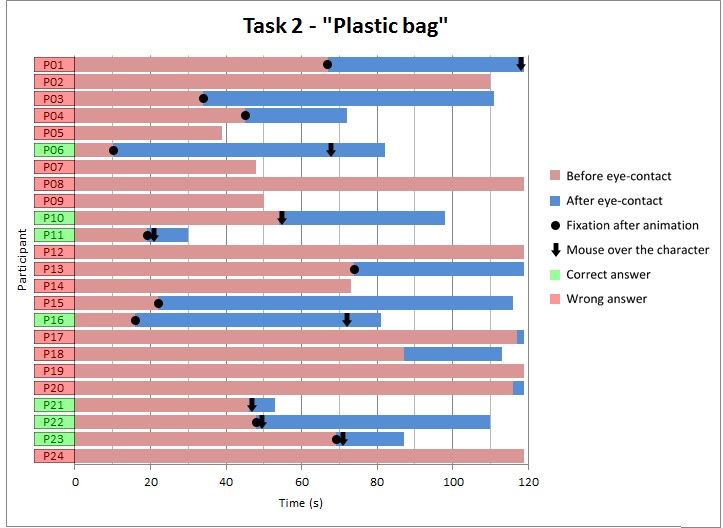 The screen recording video and gaze trajectories for each participant were analysed one after another and data was registered into the table. Several indicators were gathered. Correctness of the answer and the response time were recorded. From eye-movement data, the information about noticing of the animated cartoon character was found.

The behaviour of students and their reaction for these features were evaluated. Results of the first task in the case study shown, that most of participants perceive cartoon characters just after their animation. This fact is well visible from the scanpath and placement of users’ eye fixations. Although most of participants noticed animated cartoon characters, just a few of them use the mouse cursor to point over them and display the additional information. Even in the case of different color in the text, most of participants did not investigate whether this color expresses a special function.

After second task, the tutorial was shown to participants and they could read instructions about functionalities of the portal. After reading the tutorial, participants have immediately begun to use elements like animated cartoon characters or coloured text and answers to the questions were right. That fact indicates ability of participants to use information absorbed from manual.

Popelka, S., Vavra, A., Netek, R., & Pechanec, V. (2014). E-learning portal functionality assessment with the use of eye-tracking experiment. Paper presented at the Proceedings of the International Conference on e-Learning, ICEL.

No downloads available for this experiment