The purpose of the experiment was to evaluate if the hill-shading helps users with better imagination of the terrain. The experiment was complemented with a short questionnaire focused on users’ subjective opinion about suitability and aesthetics of both map types. The task was to find out one particular place (village or hill) in the map as fast as possible and mark it with the mouse. Two aspects were investigated – if hill-shading helps users to find the hill, and at the same time, if the hill-shading make it more difficult to find the village.

At the beginning of the experiment, respondents fill out a short questionnaire. Then, the 9-point calibration was performed. Eye-movement recordings with deviation smaller than 1° were included in the experiment. After the calibration, welcome screen with instructions was displayed. The instructions included also the sample question. Respondents’ task was to find out one particular point symbol in the map as fast as possible and mark it with the mouse click. Study was performed in within-subject design. The experiment contained 18 static stimuli with 2D and 3D maps of cities. The stimuli with maps were presented in random order. To unite the starting point of the eye-movement trajectories, the fixation cross was displayed for 500 ms before the stimulus. Respondents had maximum time of 30 second to find the target, but for the most of the tasks, the time was fully sufficient.

The aim of the case study presented in the paper was to evaluate the role of hill-shading in tourist online maps. As stimuli, screenshots from Czech map portal Mapy.cz were used. The task was to find as fast as possible particular location in the map; hill or village. Two versions of stimuli were created; with and without hill shading. Purpose of the study was to analyse, if the hill-shading helps respondents to find the hills, and in the same time, if it does not distract them while finding the villages.

The experiment contained 12 static stimuli with tourist maps in two versions – with and without shading. To avoid learning effect, the target was different for each map in the pair, but the target was located in similar distance from the centre of the image.

For the study, remote eye-tracking device SMI RED 250, developed by SensoMotoric Instruments, was used. This device was operating at frequency of 120 Hz. Eye-tracker was supplemented by web camera, which records participant during the experiment. This video helps to reveal the cause of missing data, respondents’ reactions to the stimuli and their comments to the particular maps. For data visualization and analyses, three different applications were used. First one is SMI BeGaze, which is software developed by the manufacturer of the device. Open source software OGAMA and CommonGIS developed at Fraunhofer Institute in Germany were used for visual analytics of eye-tracking data.

Eye-movement metrics Fixation Duration, Fixation Count and Scanpath Length were investigated. From the preliminary results it seems, that there is no significant difference in these metrics between maps with and without shading. In the next part of the research, data will be tested with use of Wilcoxon sum rank test.

Next part of the analyses used the method introduced by Kristien Ooms. The stimulus  is divided  into  the  grid  of  cells  and  number  of  fixations  in each cell is counted. The output grid is coloured based on the number of fixations. To compare both variants of the stimuli, the grid without shading was subtracted from the shaded one. 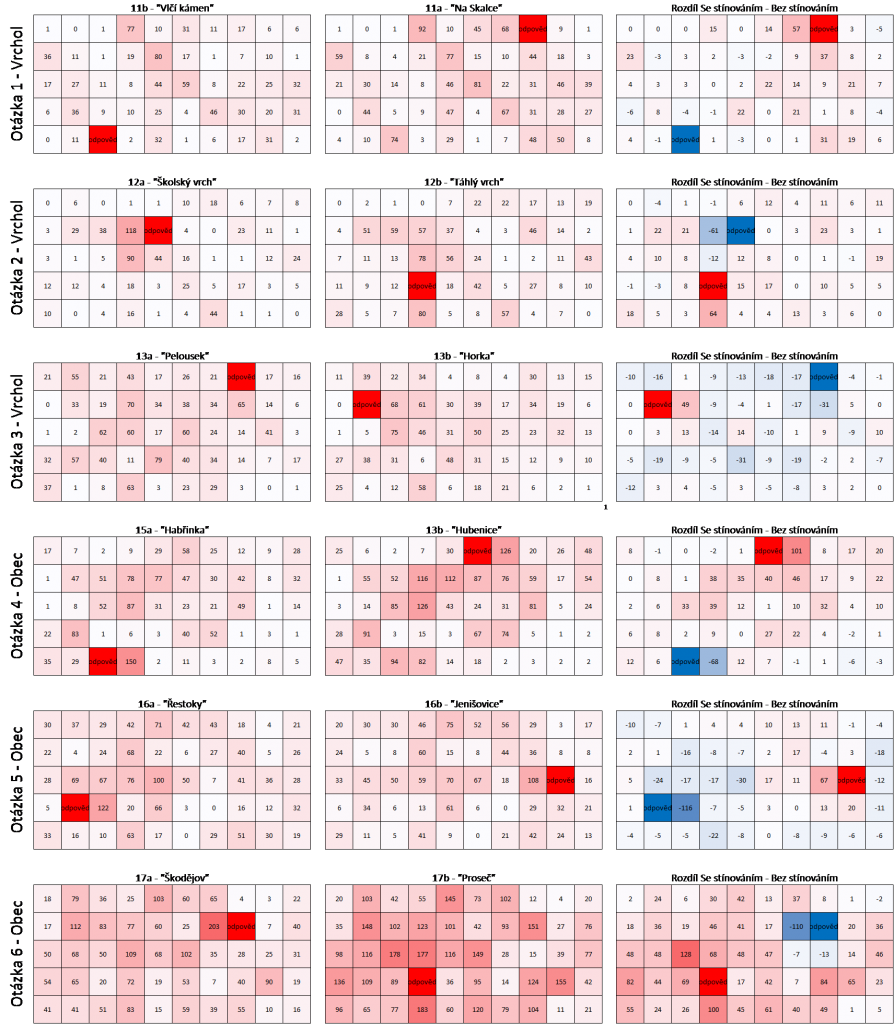 No significant differences between 2D and 3D maps were found for four metrics (Time to Answer, Fixation Count, Fixation Duration Median and Scanpath Length). Point symbol search was more difficult on the map where 3D effect was created with use of map tilt (map no. 9). For this map, statistically significant differences were observed for all recorded eye-tracking metrics. This type of maps should not be used very often, because users have problems with orientation in this map.

On the other hand, results for all other stimuli (maps no 1 – 8) indicate that in situations when it is reasonable and desirable, the 3D map of the city could be used instead of the standard two-dimensional. In the three-dimensional map, more information is contained and the 3D representation did not influence the reading of the map and its comprehensibility.

Popelka, S. (2014). The role of hill-shading in tourist maps. Paper presented at the CEUR Workshop Proceedings.

All stimuli with questions can be downloaded from here: Stimuli-Shading